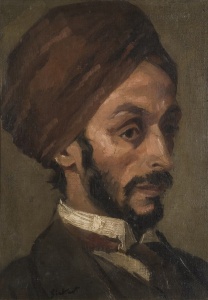 Sickert entered the room – the heavy velvet curtains drawn against the Venetian sun threatened to burn a hole in the heavy fabric. Outside he could hear the throng of travellers on the Piazza San Marco. On the small table was placed a brass coffee pot and by its side a small blue and white porcelain cup. The easel stood waiting for him, the colours mixed; Cerulean blue, Rose Madder, Viridian. He sat down and waited for Aarash to appear – he was always late. Sickert poured the strong liquid, its pungent smell lingered on the senses like wine and its strong, sticky taste bit into his tongue. It would always remind him of Venice, this day, this year 1895. In the room the buzzing of a fly interrupted his brooding and he batted it away as it circled the sweet smelling coffee. It flew on to the cream roses shaded in the corner of the room just as Aarash came in.

Why am I always late, Walter thinks of me as one of those beggars endlessly wandering through the streets unable to settle like that infernal fly buzzing around. Why doesn’t he kill it. I sit here unable to move. Outside the steady sound of the people, in here only that accursed fly and Walter humming – his tuneless humming. He works so fast, mixing the paint, dabbing the oils onto the canvas, and the smell, sharp, oily yet clean, unlike the street smells of Venice so strong that I have to hold a bunch of herbs to my nose. The roses are beautiful, although they do not compare to mine in Kabul. The last time I saw them they lay scattered on the floor like small crumpled heads. Walter loves roses. Tonight as my gift I will put some in his room. That fly again, I want to move. I can hear him sip the coffee. He says I can have a break but I must remember the pose – we can talk about France, Paris, so different from Venice except for the beggars.

A little to the left just dab it on carefully, the light is too strong I need to mix the ochre a little darker. Such a nose, what an aristocrat, like a character from the Arabian Nights – my first impression when we met in Paris, sitting in that gloomy cafe, the cigar smoke swirling around him. A perfect prince, my Afghan gentleman. Now I’ve got him. A captured bird in a suit from Saville Row and a collar that looks as though its choking the life out of him. At least I managed to get him to wear the turban. So much better, so much better, although he’s sweating. It’s damnably hot in this room, but those curtain had to be fastened back, I need the light. Time to stop, give him a rest.

The two men stood in the room. Aarash too nervous to undo the collar mopped his face and sipped the coffee that Sickert poured for him. Still the fly buzzed angrily hitting the tall window trying to get out, until Sickert opened the casement and the fly escaped. They both gazed silently at the people as they walked up and down the Piazza in the brilliant sunshine, although some stood like statues in the shade trying to hide from the heat.

“I never liked street scenes, too much movement I prefer to catch the moment when an unguarded thought crosses the face.”

“May I see the portrait?”

“Oh no, not yet, only when I have finished do I allow my subject to see the finished painting – Aarash dont look so alarmed your secret is safe, all the public will see is a dignified Afghan gentleman.”

Aarash smiled but the gesture hid the alarm that he felt. Why had he allowed Walter to paint him – what if someone saw it and recognised him – would he be able to visit Kabul, or even for that matter, Russia again?

Sickert eager to get back to the canvas guided Aarash to his chair. He fussed around and placed him in the same position as earlier. Hurrying back to the canvas he threw back the linen sheet and taking his brush began to mix the colours.  Aarash perfectly still, not a line out of place, tried to breathe normally.

“I need to cough Walter,” Sickert nodded assent and waited patiently, whilst Aarash coughed and spluttered.

“Here,” Sickert poured a glass of water from the carafe on the table and handed it to him.

They resumed once more. Aarash thought of the mountains he would have to cross later that month, of the narrow passes of the Hindu Kush and the small packages that he would be taking to the Colonel.

“That’s it keep thinking that thought – its perfect.”

Aarash still as a stone, saw the rocks, the snow capped hills, and felt the burden of the life he had chosen. His father had told him that honour and duty was the price to pay for love of country. Now he realised he had been beguiled in Paris, that charmed by Walter he had arranged this sitting in Venice and that very soon, too soon, it would all be over. He stared ahead and Sickert glancing up, wondered what thoughts had made the mask slip so slightly. He smiled, how would the world view this Afghan gentleman.

Mr Sickert and the Afghan Gentleman was inspired by Walter Sickert’s portrait of the same name.

Patricia Osborne is a teacher and poet. She was born in Wales and now lives in Brighton.

One thought on “Mr Sickert and the Afghan Gentleman – Patricia Osborne”

Drawn To The Page is supported by